Bottom care is often overlooked by owners. We offer the best boat bottom painting services in the Lake Lanier area. Bottom painting is significant to guarantee top performance while on water. The paint used serves as a protecting coat that prevents aquatic organisms from eating and deteriorating the bottom of your marine vessel. If your boat stays in the water year round or for the majority of boating season, bottom painting is highly recommended. For those unfamiliar with this service, or with any further questions, call Lakeside Marine today to find out more about the concept of bottom painting.

® Water-Based Ablative Paints have fewer VOC’s, no foul smell and clean-up is simple with soap and water. Yet with all this green going for it, Hydrocoat is a very effective antifouling and is as good as the best solvent-based bottom paints. Hydrocoat can be applied over any other bottom paint without any preparation. Hydrocoat makes everything easier, from painting, to clean-up, to breathing.
Hydrocoat® SR is the world’s first dual-biocide, water-based, ablative bottom paint. Dual-biocides provide outstanding multiseason protection. Hydrocoat SR uses an organic algaecide to offer outstanding protection against hard and soft fouling, for better antifouling protection and a greener earth. Ablative technology eliminates sanding and paint build-up. It is easy to apply and cleans up with soap & water. BLUE – 1247 GREEN – 1347 RED – 1647 BLACK – 1847
Ultima® SR 60 delivers exceptional, multi-season, dual-biocide performance by combining the highest ablative copper load (60%) with slime resistant Irgarol®. Contains 50% more copper than Micron® Extra, to provide stronger protection in even the toughest conditions. Its ablative surface wears away over time, reducing build-up. Note: Due to extremely high copper load, some variations in color and finish may occur BLUE – 1032 GREEN – 1033 BLACK – 1038 RED – 1036
Ultima® SR 40 utilizes a high copper load (40%) combined with Irgarol to offer outstanding dual biocide, multi-season control in all types of fouling. Its ablative surface minimizes coating build-up to keep underwater surfaces smooth, while providing a continuous supply of fresh biocides. Can be hauled and re-launched without repainting. BLUE – 1092 GREEN – 1093 RED – 1096 BLACK – 1098
Hydrocoat® ECO Self-polishing, water-based ablative technology with organic Econea™ biocide. Hydrocoat Eco utilizes the highest level of new metal-free Econea biocide available combined with a slime fighting inhibitor for unprecedented multi-season protection. This copper-free formula is compatible over almost all bottom paints and is safe for use on all substrates including steel and aluminum. BLUE – 1204 GREEN – 1304 RED – 1604 BLACK – 1804 WHITE – 1104
Hydrocoat® offers excellent multi-season protection against all types of fouling. Its innovative technology replaces the harsh solvents found in most bottom paints with water, resulting in an easier application and clean up, with no heavy solvent smell. Hydrocoat’s ablative surface wears away with use, exposing fresh biocide while eliminating paint build-up and the need for sanding. Its unlimited dry time to launch allows for painting in the fall. BLUE – 1240 GREEN – 1340 RED – 1640 BLACK – 1840

HOW MUCH BOTTOM PAINT DO I NEED?

1. Calculate the square footage of the hull to be painted – multiply the length of the hull by the beam then multiply that total by .85 Length x Beam x .85 = Square Feet of Hull length beam.

2. Divide that number (your square foot total) by the amount of coverage the selected bottom paint offers. This will give you a one-coat total. 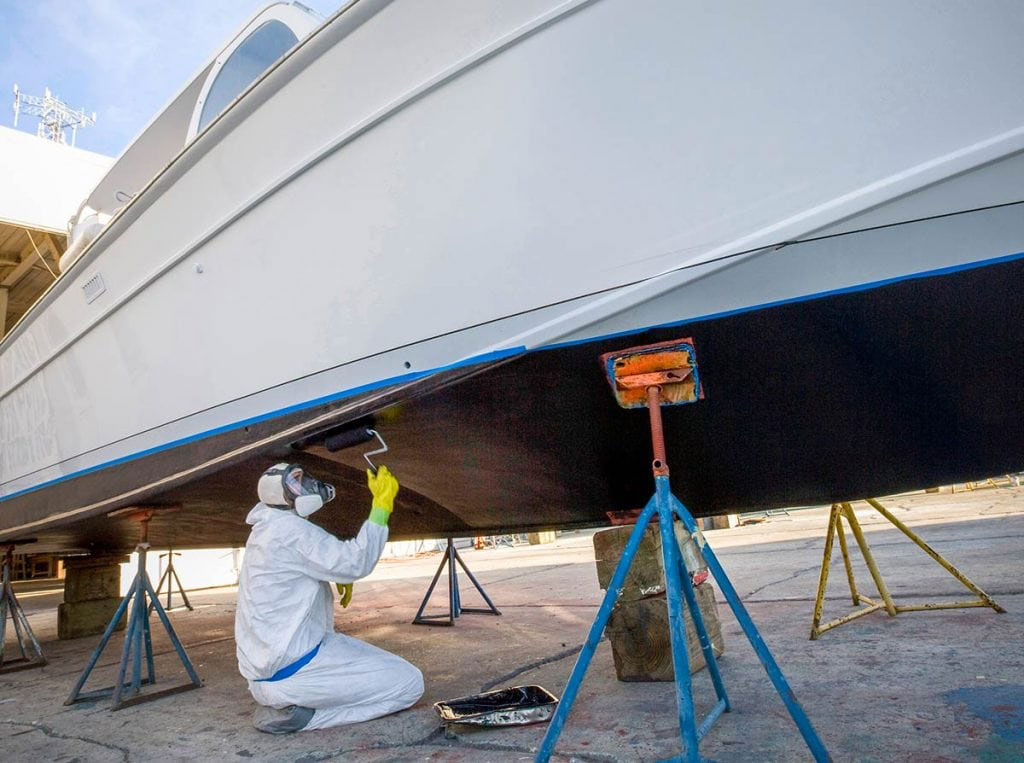 Bottom care is often overlooked by owners. We offer the best bottom painting services in the Lake Lanier area.

Our team is dedicated to bringing the customers the best service ever, and here are some thoughts they have shared.

Dane and his crew put one of the best in the business. Great service, fair pricing and get the job done on time or sooner. We also you their mobile serviced.

I brought my jet ski in for a diagnosis and they ended up fixing it for the same price of the diagnosis. Great guys, even better service.

I wouldn’t take my boat anywhere else. Dane is knowledgeable, fair and always has the customers always comes first.

Customer Service Is The Best In The Business! Great Local Company - Gary Is A Super Representative Of The Company - Call Him!